Literature, and poetry in particular, has always been a tool to understand culture. Sometimes it has even gone beyond and helped cultures to expand and develop. Poets understand that language, essential to human survival, has its own limits, but they also see these limits as an incentive to produce new expressive forms, other languages that transcend the old one to understand and tell what is not yet immediately comprehensible or immediately utterable. This awareness, coupled with the desire to trespass the limits of one’s language, have produced what we today call literature.

Language, intended as an instrument that offers the word countless opportunities, requires nevertheless a corollary of skills. Using it in a poetic way requires a certain familiarity with literature, or rather with literatures, with the oral and written traditions that preceded it, formed it, and complicated it. Language is therefore bound by the vast experience of the past. Italian, a language with a time-honored literary tradition, offers an exceptionally interesting case. On the one side, it boasts the legacy of its noble past, and contemporary poets frequently return to the classics to draw inspiration and new meaning. On the other, that same legacy becomes a burden that crushes the emerging voice under the immense weight of its greatness. This contradiction has produced different reactions, driving poets to experimentations that were considered at times reactionary or decadent by later authors, but which nonetheless have impacted the literary movements of twentieth-century Italian letters.

In the second part of the twentieth century, after the tragic experiences of fascism and WWII, the economic boom, the years of terrorism, the hedonism of the eighties, and the economic and political crises Italians experienced in the new millennium have exacerbated what Pier Paolo Pasolini defined as Italy’s “anthropological mutation.” The value he found in cultural and linguistic authenticity had been rejected while consumerism had deprived the new generations of the utopian dynamism that usually characterizes them. The great dreams that animated political and social movements in the sixties and seventies was extinguished, yielding a widespread sense of disenchantment and frustration. From the nineties, the ethical drift caused the rejection of every sense of civic responsibility while politics was bent to serve exclusively individual interests and personal agendas. Italy’s cultural and social crisis was central to the poetry of the period and testified inexorable ruin often more effectively than narrative production ever could.

The editors of this volume are aware of the experimental and provisional critical approach utilized in this project, but wanted nevertheless to start a conversation on the possibilities offered by the complexities of our reality as they are witnessed, recorded, and experienced by Italian and Italophone poets today. We hope to have started a productive conversation that may help Italian and Italophone authors to develop their poetic expression further and we invite critics to articulate their own perspectives on this emerging phenomenon. Globalization informs our lives, often in a negative way. We hope that this exploratory volume inaugurates a debate on the expressive possibilities of the countless transnational encounters in which we dwell every day, at both the linguistic and the cultural level. Most of all, we hope that the rich complexity of these encounters can be translated in new and original poetic forms.

Innovation and Invention in “Kidhood”: When a Poet Writes in a Different Language
AL REMPEL

Brenda Porster: The Body as Home, the Home as World
ALESSANDRO CANZIAN

The Immense Structure of Happiness: Rachel Slade and the Metamorphical Poetry of Apocryphal House
LOREDANA MAGAZZENI 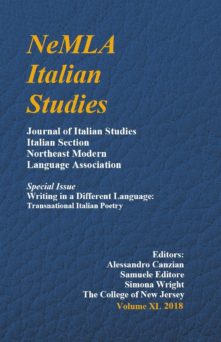